Much was written recently to commemorate the 25th anniversary of the release of Pearl Jam’s debut album, Ten, which hit stores in the halcyon days of August of 1991. Like many members of Generation X, the music of Pearl Jam is inextricably intertwined with my coming of age (and now, my memories of that lost youth). The early 1990’s were my high school years, and “Alive” and “Black” became staples of the mix tapes I’d play while driving the suburban streets of Houston, Texas in my 1986 Dodge. The following year, I’d see Pearl Jam perform at Lollapalooza ’92 at that tour’s Houston stop. I’d see the band again in Austin in 1995 when they invited the Ramones to open for them. My fondness for the band remains intact, and I enjoyed seeing them recently in Charlotte in 2013. But it is that first album, Ten, along with its magnificent b-sides, which is still my favorite.

The recent nostalgia for the album reminded me of one of the joys of the pre-Internet days: scouring record stores for obscure b-sides that might not be found on commercially available albums. In the Houston of the early 1990’s, that task required monthly visits to Sound Exchange, Infinite Records, or a number of other now defunct shoppes where I would learn of and discover imports, bootlegs, and other elusive fare of that ilk.

That was the era of CD singles, and like many bands, Pearl Jam released a host of them. But in the band’s early days, Pearl Jam released singles for songs like “Alive” and “Jeremy” in foreign markets without a corresponding American release. Thus, if a fan wished to own a CD containing “Yellow Ledbetter” or “Footsteps,” he or she had to seek out the import of the “Jeremy” single. Imports weren’t cheap. Reading the Wikipedia entry for “Jeremy,” I am reminded that “[w]hile the ‘Jeremy’ single was released commercially to international markets in 1992, the commercial single was not released in the United States until June 27, 1995 and was only available as a more expensive import version beforehand.” In fact, when the American version of the single finally saw its release, the jewel case was emblazoned with a sticker which proclaimed: “Not To Be Confused With More Expensive (Identical) Import Version.” Of course, by 1995, I’d long owned the more expensive import version after buying it at one of the local shoppes. I don’t recall the day I finally chanced across it, but I know that I once did. 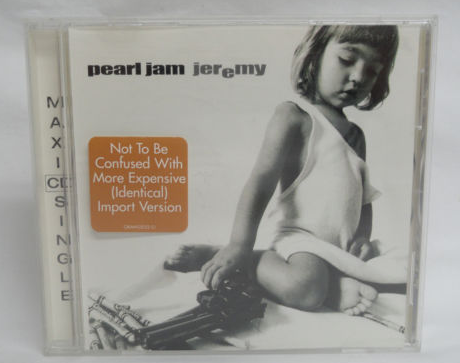 Stumbling across a long sought after album or single is now, for the most part, a forgotten joy when one can easily purchase such things on Amazon, eBay, or Discogs. In fact, with the advent of streaming, one need not even purchase the track; it can be located relatively easily on Spotify or YouTube with extraordinary ease. Although the Internet remains a marvel, it has robbed us a bit of the delight of the quest for rarities. Oh, well.